MR. TRUMP, YOU'RE AN IDIOT.

Mr. Trump:
You’re an idiot. Actually, idiot doesn’t even begin to sum you up. Monster might be a better term. Just when I thought you couldn’t sink any lower, you have.
Congratulations on doing your best to capitalize politically off of the heinous tragedy in Orlando.
Patting yourself on the back and issuing an I-told-you-so on Twitter in the wake of 50 needless deaths? Classy, Donald. Classy.
Want to implement your racist, Hitler-esque proposal to ban Muslim immigration? It wouldn’t have helped. The shooter was born in the US.
Think that arming everyone would have prevented this shooting? Think again. There was an armed guard at the nightclub. How did that work out?
Why should anyone be able to buy an automatic or semiautomatic weapon, anyway? Oh, you’re going to hunt deer? I think not. You’re going to hunt humans.
You’re all of a sudden trying to present yourself as an advocate for the LGBT community? How many times have you come out against gay marriage and equality? How many times have you made derogatory comments about everyone from Caitlyn Jenner to Michael Sam? 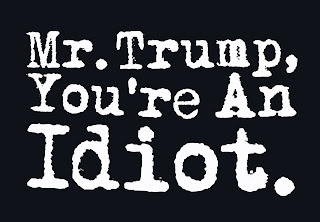 You, Mr. Trump, and those who share your xenophobic, homophobic, bigoted, ignorant views, are the reason ISIS and terrorists worldwide hate America. You absolutely sum up all of the reasons why we are under attack. If all Americans were like you, I wouldn’t be too fond of this country either. Our biggest threat is coming from within: Americans who have realized that this country stands for something pretty far from the values it was founded on.
Deluded Donald, you are truly an awful person, to your core. You have spent your entire life in a high tower of wealth and affluence. You are absolutely clueless on foreign policy, and all policy, really. You respond like a bullied toddler when someone attacks you. You rejoice when the market crashes, so you can make money. You flip-flop on everything, including political parties. You’re a liar. A cheat. A bigot. A fraud.
You bring a bulldozer when a surgical scalpel would suffice.
Judd Apatow put it like this on Twitter: “Is it possible to be a more self serving, terrifying dumbass than you? Congrats on that. You won that contest.”
Want to make America great again? Shut the hell up, and withdraw from the presidential race in disgrace.
Posted by Unknown at 1:22 PM

I think you underestimate him greatly, how you think if he was an idiot HOW he could become president, and win the race!? I think he's fooling all with his theatrical character of fool!
http://123midterm.com/