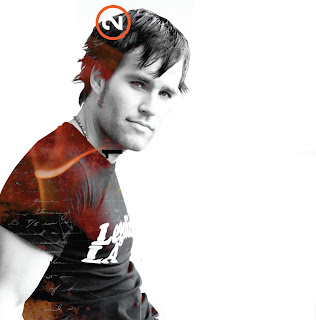 Whatever your religious or societal views, it's hard to ignore the fact that this time of year is a season of giving. Why we sometimes wait all year to give perfunctory gifts or say perfunctory thanks is a mystery to me. At least we do it at all, I suppose.

I've spent a lot of time with myself over the years (practically every waking second), and I've come to realize, much to my chagrin, that I don't say thanks enough for what's given to me.

On this Christmas Eve, I want to say thanks. To you. Thanks for reading this blog entry. Thanks for buying CDs, for coming to a show, for taking the time to write and let me know that one of my songs means something to you. Thanks even for downloading my music illegally and sharing it with a friend.

Thanks for giving me the opportunity to do what I love doing most. Without you, I would be strumming my acoustic guitar in the basement. Forever. I've been blown away by the kindness I've experienced from club owners, from radio DJs, from fans, from fellow musicians. From you.

I can't wait to make music for as long as I can. No, I don't aspire to be one of those aging rockstars who has to have an ambulance waiting backstage. I won't say any names, Mick Jagger. But I do look forward to playing more shows, writing more songs, and building more friendships with people along the way.

I hope that this Christmas, this Hanukkah, this Kwanzaa...rocks.
Posted by Unknown at 2:11 PM No comments: 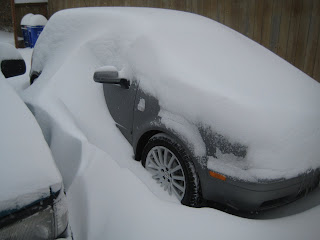 Portland has gotten rocked with snow. To make matters worse, idiocy is running rampant. An alleged professional just referred to an anemometer as a "windometer" on Portland's Channel 8. Furthermore, the station's coverage of the storm is called "Arctic Blast." Reminds me of a menthol-flavored colon cleanser.

Here's a picture of my car, I think.

Klubjumpers, the club gurus who have remixed songs for such artists as Mariah Carey and the Black Eyed Peas, just finished their take on my song, "It Won't Be Long. " I just posted the shorter radio edit of the remix on my MySpace page today! Give it a spin and let me know what you think.

Some A&R people from Universal are listening to the track and considering an EP deal! Klubjumpers are also confident the song will chart on Billboard! Good news! How many more exclamation points can I use! In one! Paragraph!

Also, have a look at the demo for the full-length feature film, "Twisted Redemption," that will feature my song, "What Can I Say?"

As always, please vote for me for the 2009 Portland Music Awards! Voting closes January 1.

Posted by Unknown at 5:22 PM No comments: 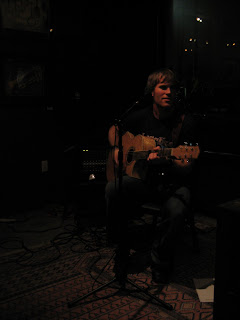 I'm feeling really groggy right now. Slept in today and woke up to a bunch of new snow and the news that all of my plans for the day had been canceled. I'm brewing some organic dark roast coffee right now, and just the smell of it is perking me up, but also mocking me because my coffee maker doesn't have a steal-a-cup feature.

I played in Portland at a small, chic wine bar last night. Despite blizzard conditions, a small yet loyal following made it out to Vicinato to listen to two hours of me. Vicinato rocks.

Throughout the night, whenever I asked for anything, somebody put it in my mouth. Anything. I asked for water and got beer. Asked for a taste of caprese and got a skewer. I could get used to this.

I kicked off my "Write My Song" contest last night. I played a song I'm writing, and asked the audience to write down a title and what the song should be about. I'll be posting a video online this weekend. I'm gonna pick one title and theme, and write the lyrics based on that. If I pick your idea, you get a free Jon Davidson T-shirt, or a free CD. Your pick.

Stop reading this lame blog and go vote for me for the 2009 Portland Music Awards!
Posted by Unknown at 12:27 PM No comments:

I have eight pieces of good news. Here they are, in no particular order of prominence.

1. I listened to the unfinished remix of "It Won't Be Long" last night. Played it for some fans and friends. It rocks!! Klubjumpers should be done with it this next week. And, they're confident it will chart on Billboard. Billboard!

2. Jon Davidson T-shirts, tanks, and hoodies are on the way! James Fletcher, design guru with THELABDESIGN, finished the design over the weekend. They're being printed in Georgia (the state, not the war-torn country) and will be available by January. Soon I won't have to wear my "Hello, My Name Is" sticky nametag anymore.

3. I ate either eight or nine bananas today.

4. I didn't go to the studio today to work on "Never A Metaphor," a new track. While this could be construed as bad news, it also meant that I got to sleep in till 11:30 and have breakfast in bed.

5. People from all over the world have written me to tell me they voted for me for the 2009 Portland Music Awards! It's cool that a chick I don't know in Japan took the initiative to not only vote for me but to get her whole Economics class to vote for me too!

6. It is 22 degrees here in Portland, and there's snow on the ground. I hate snow. 21 years in Michigan is enough to instill anyone with hatred for most kinds of white, powdery substances. Good news, though: I can feel the cold, which means I still don't have leprosy.

I wonder if the words "leprosy" and "leopard" have the same etymology. "Leotard," even. I digress.

7. I freaking love my job! I can't wait to play at Vicinato Wine Bar in Portland this Friday. I'm so grateful for everyone who comes to my shows, buys my CDs, and gives me the opportunity to do what I love doing.

8. Christmas is almost here! Which means that I'll only have to listen to "Jingle Bell Rock" sixty-seven more times this year.
Posted by Unknown at 1:43 AM No comments: 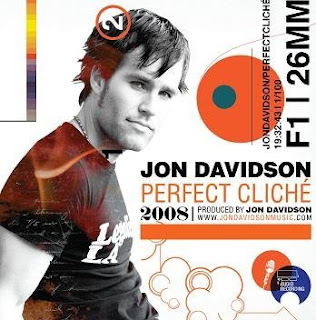 So if you're anything like me, you haven't even started your Christmas shopping yet. Getting your leftover 2007 wrapping paper out of the closet doesn't count, unfortunately.

Why not give the gift that keeps on giving? I'm referring, of course, to my new album, Perfect Cliche.

From now until Christmas eve, you can get it for only $5. 99 when you buy two from CDBaby. This deal is not available anywhere or anytime else. else. Heck, I can't even buy one for that cheap.

While you're online, swing over to the 2009 Portland Music Awards website and vote for me and my album. You won't save any money, but you can make a difference in my music career. If that doesn't make you smile, get someone to tickle you. 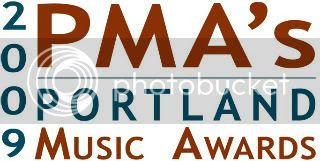 Posted by Unknown at 6:20 PM No comments:

I Need 20 Seconds Of Your Time. Por favor. 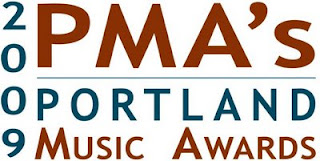 It's not too late for you to vote for me.

Click HERE to vote. You can type in my name for the "Best New Artist" and "Best Male Artist Of The Year" categories, and type in my new album, Perfect Cliche, for "Album Of The Year.".

Don't stop there! I'd love to be voted Portland's best music venue, as well.

That makes no sense.

Anyway, thanks for voting!

Some fans have been asking what I've been listening to lately. You NEED to check out my man Russell Stafford's 6-song EP, Between U & I. "Cheap Wine" will not get outta my head.

Played an unusual, but packed, show with my rock band Silversafe at the Vancouver Mall today. Rekindled my love for Honey Nut Cheerios today as well.

So I need an alter ego. Since Sasha Fierce is already taken, and I can't be Puff Daddy in England, and I also can't cop Joe Satriani or his songs (Coldplay beat me to it), I need a new name. Why, you ask? Well, Klubjumpers, the remix gurus who have worked with artists such as Madonna, BEP, J-Lo and Mariah Carey, are remixing some Jon Davidson.

That's right, "It Won't Be Long" is going house. And the boys of Klubjumpers are confident they can get it charted on Billboard.

In any case, the remix will be available on iTunes and on my MySpace page before Christmas.

While you wait, pick up a free ringtone of "Hermit Crab" or "Beautifully Bittersweet", exclusively on my MySpace page!
Posted by Unknown at 2:18 PM No comments:

What Is A Buffalo Gap Anyway? 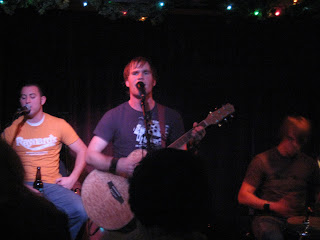 According to Buffalo Gap's website, Buffalo Gap is a dot on the map in South Dakota. According to urbandictionary.com, it's anything from a drinking game to a display of authority. Add a 'gap' to these definitions, and they become completely nonsensical. Maybe even dirty. The website even offers a grammatically-correct sentence containing nothing but seven different uses of the word 'buffalo.' You should definitely check out the definitions of 'buffalhoe' and 'buffaleep.' They're buffalicious!

I played at Buffalo Gap in Portland last night. One of PDX's most intimate venues, the Gap boasts a slanted ceiling and a great crowd. Forty-five minutes of Jon Davidson is never enough (for me, at least).

Russell Stafford played after me, with an acoustic band featuring three acoustic guitars and an acoustic bass. He pulled off a simmering cover of Muse's "Hysteria." Stafford, originally from Sydney, Australia, is a top-flight singer/songwriter now based out of Portland. Grab his new album, Between U & I, today. Or else.

Thanks for coming to the show, y'all! I'll see you Portlanders at Vicinato Wine Bar on the 19th.
Posted by Unknown at 2:54 PM No comments: 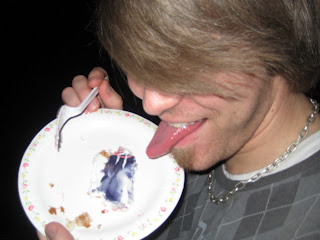 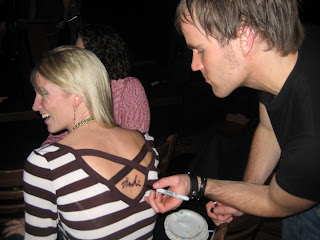 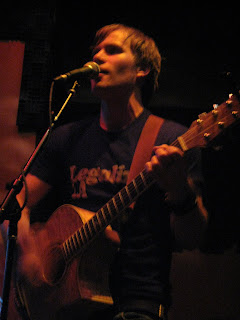 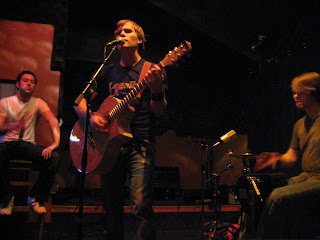 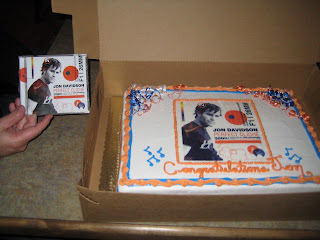 This last Saturday, I celebrated the release of my new album, Perfect Cliche, at Macadam's in Portland. I wasn't celebrating alone. One employee said that my show brought the largest Macadam's crowd he'd seen in years.

Issues with the sound system delayed the start of the show by a few minutes. C'est la vie, monsieur. (I don't speak French, so don't ask for any more than that. They should change the name of the language to Freedom, anyway.)

Chris Merrill, frontman for the eponymous Portland pop/rock band, kicked the show off with a sweaty, gritty, solo acoustic rock set. Merrill has one of the best voices in the Northwest, period. If it were possible, I would have babies with his voice. In the most heterosexual way possible.

I took the stage, along with Matt Tjostlovson on hand drums and Tony Ramal on vocals, shortly after ten, and played for an hour and a half.

Yeah, I know I was wearing the same shirt as I did for my album photoshoot. That was planned.

After the show, Mandy and my parents (who had flown in from Michigan) conspired to get me a cake with the CD cover on the front! Despite clearly stating my intentions to eat my own frosted head, Matt got ahold of it. I hate him. After signing some autographs on CDs, posters, and backs, we took the party on down the road.

I can't say thanks enough to everyone who made my CD release show amazing. My Portland fans simply rock.

Don't miss my free show at The Buffalo Gap with Russ Stafford tomorrow night!
Posted by Unknown at 6:55 PM 1 comment: